Minimalism has become the aesthetic language of gentrification and displacement. In metropolises like Berlin, narrow, minimalist townhouses with beech wood balconies are squeezed between old structures, or apartment building facades are reduced after renovation by investors to signal that rich people with exquisite tastes now reside here. The inhabitants of these buildings often also represent a moderate minimal lifestyle. Many of them believe that minimalism is a kind of philosophy that helps people achieve greater concentration, balance, and creativity, as in Eat Pray Love or Marie Kondo for advanced learners. Of course, the neighborhood, including the populace, should not only be minimized and tidied up. The focus is to be shifted to the essential, the remaining detail, which is loosely arranged and presented as if by chance: A child on a Babboe cargo bike, a folkloristic woolen blanket in front of a washed-out concrete wall, Liv Ullmann eyeglasses, a fragile spiritual tattoo that flashes out beneath the sleeve of an A.P.C. blouse.

A somewhat forgotten forerunner of the poetically reduced aesthetics of the creative daddies and mothers with antenna buns is the so-called Post-Minimalism of the late 1960s. At that time, artists such as Eva Hesse, Robert Morris, and Paul Thek injected sex, queerness, politics, and poetry into the purity of Minimal Art. Like them, an entire generation of artists wanted to break out of the white cube and bring subjectivity into play without renouncing emptiness, distance, and reduction. Back then, this was associated with a great utopia: that art could make a difference in society, connect with life and the community.

Today’s educated hipsters deploy similar strategies. They absorb the aesthetics of Post-Minimal and the feminist avant-garde, throw in some eighties hedonism, and mix the whole thing with a hearty pinch of hygge, cocaine, and Biedermeier. The result is an undead culture that is progressive, green, liberal, climate-friendly, and feminist and at the same time embodies only one longing: for tidier, more tasteful, more manageable space—only a little less dirty and precarious, giving priority to huge high-tech strollers, galleries, and Montessori schools. Because this hypocritical pseudo-minimalist capitalism has parasitically infested her residential district in Kreuzberg, Lisa Herfeldt was forced to breed parasites herself that consume the current social slush.

The fabric sculptures she tailored for her exhibition at Between Bridges simulate huge, super flabby, super bored, disillusioned teenage tongues. They just hang out and take up space. Every now and then they lick at the room or the political mood, which is quite sobering, actually very sickening. Herfeldt’s sculptures, which, somewhat squeezed in, stick out of Plexiglas boxes and even look Post-Minimal. They embody this thinking and want to bring the political and the personal into a reduced form. At the same time, however, they are relatives of the doodles made by adolescents on a pad, or Dali-lip shaped ashtrays created in art classes in school. They are deliberately regressive and also a bit precarious. The fabric they are made of is normally used to make bomber jackets and sleeping bags. But they can also conjure up artificial leather sofas and quilted nylon blankets, all the things that deface minimal Bauhaus-style homes. Or the soaked jackets of people who spend hours standing at Kottbusser Tor on a winter’s day in freezing rain. Everything gets stuck on padded things—moisture, smells, dirt. Herfeldt’s tongues could serve as mats, wall cladding, or window insulation. One of her beige tongue objects blocks the exhibition space so that the dirt from shoes and prams inevitably sticks to it.

In her previous exhibitions Bodybuilding (2016) and Dream Home Heartache (2017), Herfeldt worked with small-format fabric sculptures in Plexiglas boxes. At that time, her miniature objects, reminiscent of sausages and tongues, corresponded with the colors and shapes of advertising pages from interior design magazines such as World of Interiors and Homes & Gardens. In social slush, however, the giant tongues do not refer to interiors or design. In terms of their proportions, the objects still react to the exhibition space, but not really in the sense of Minimal Art. They’re actually just hanging in the way, useless, anti-minimal, anti-furnishing, anti-displacement. But perhaps for this very reason they are also suitable as a bedspread for the culture of the undead.

Further event in the context of the exhibition: 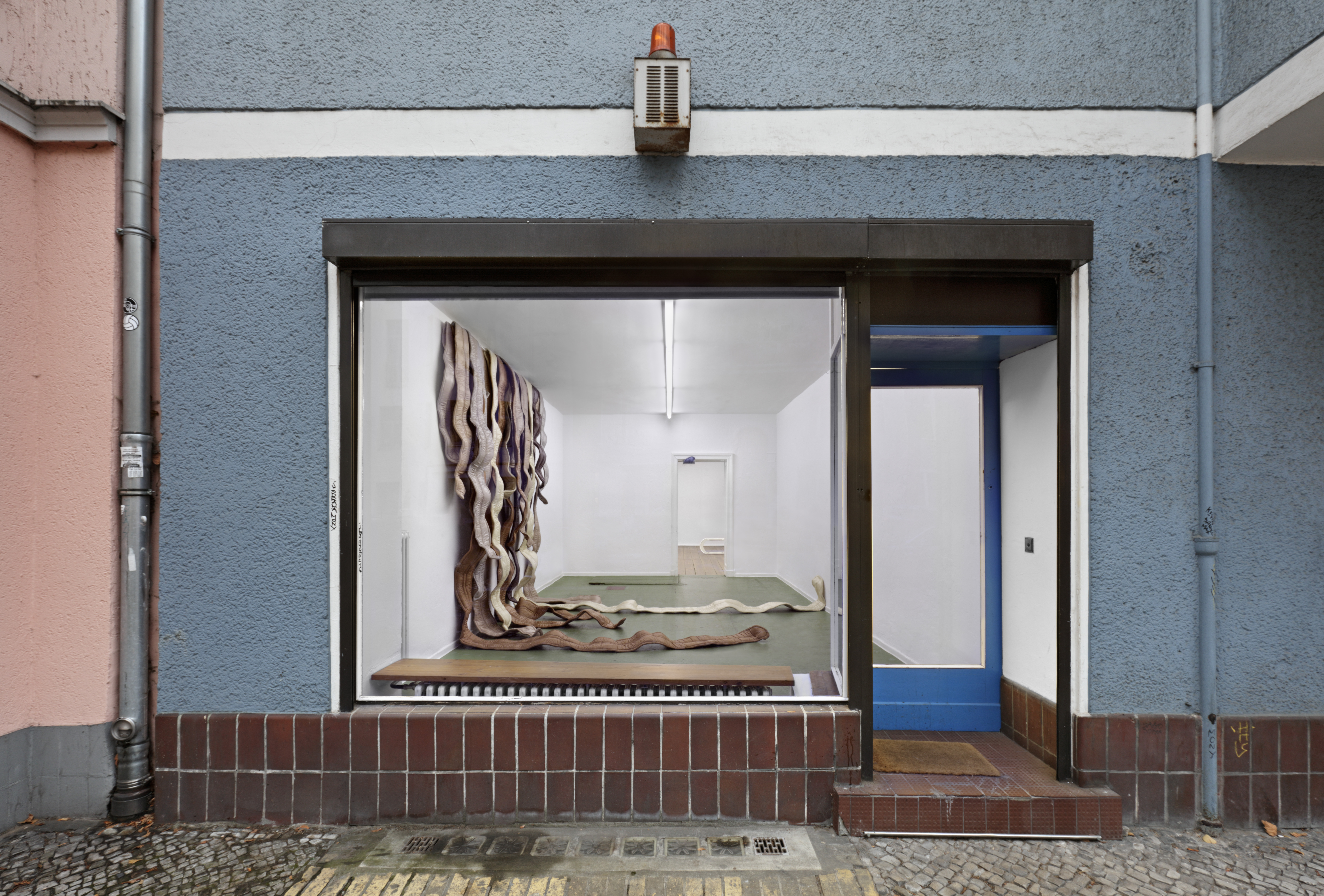 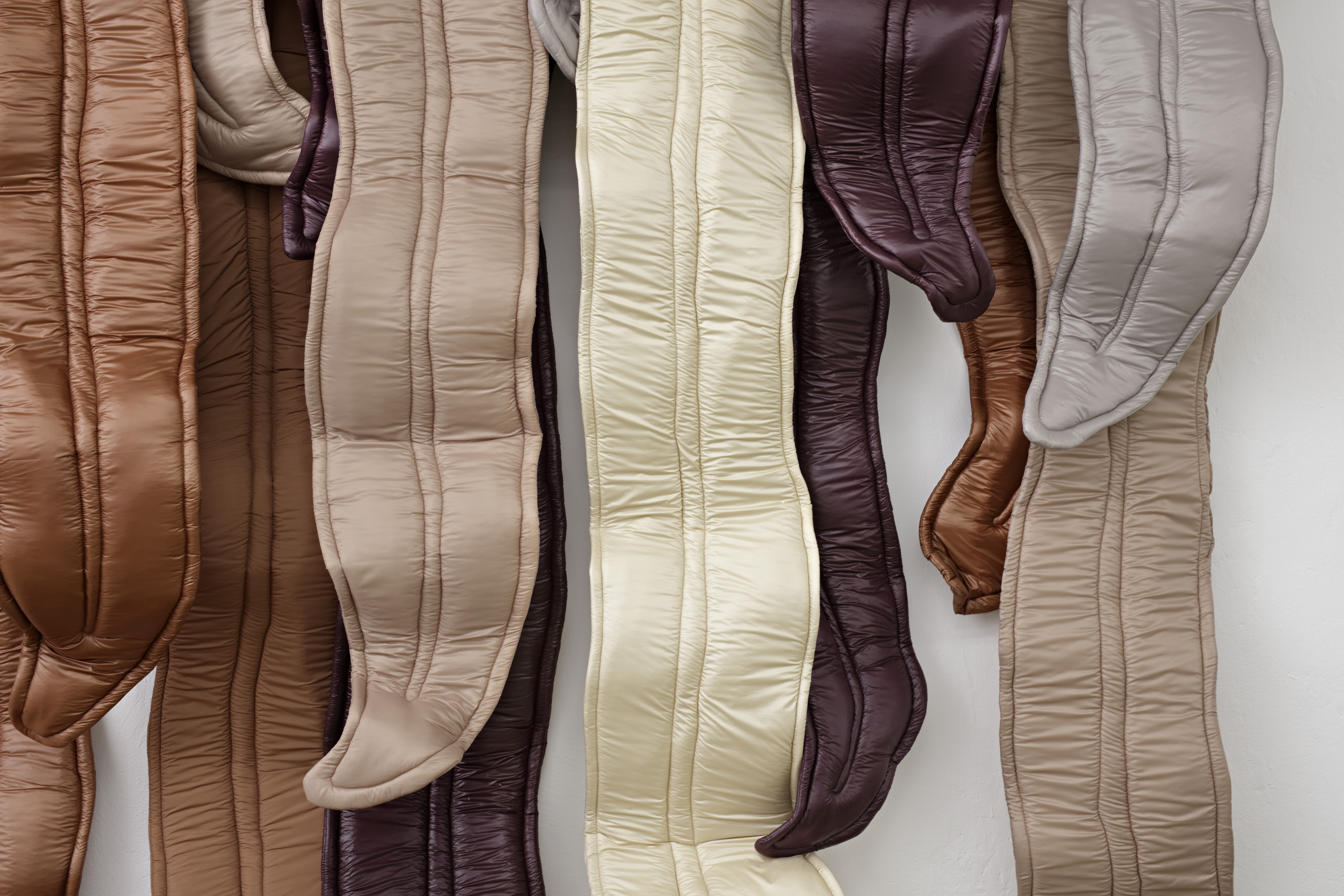 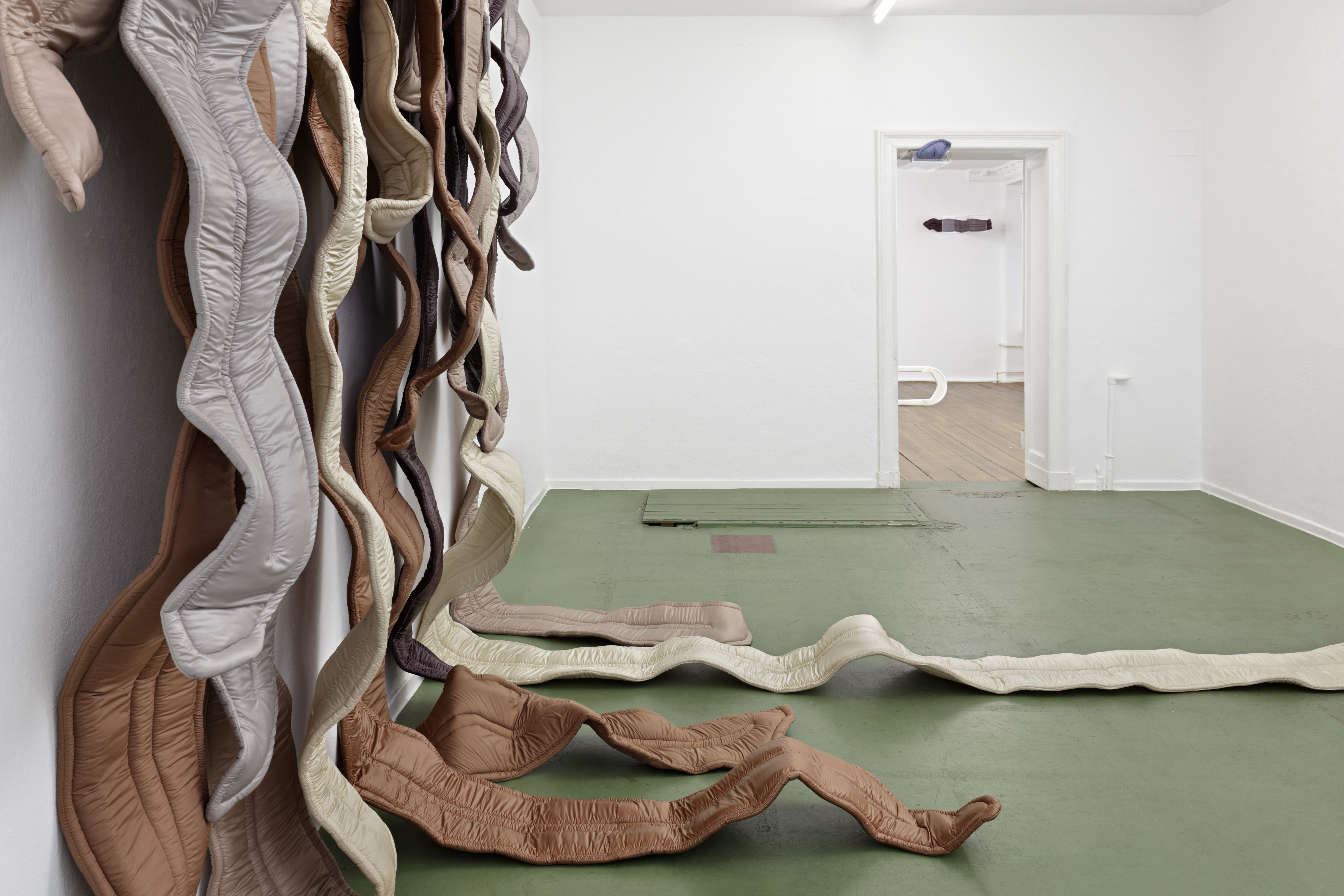 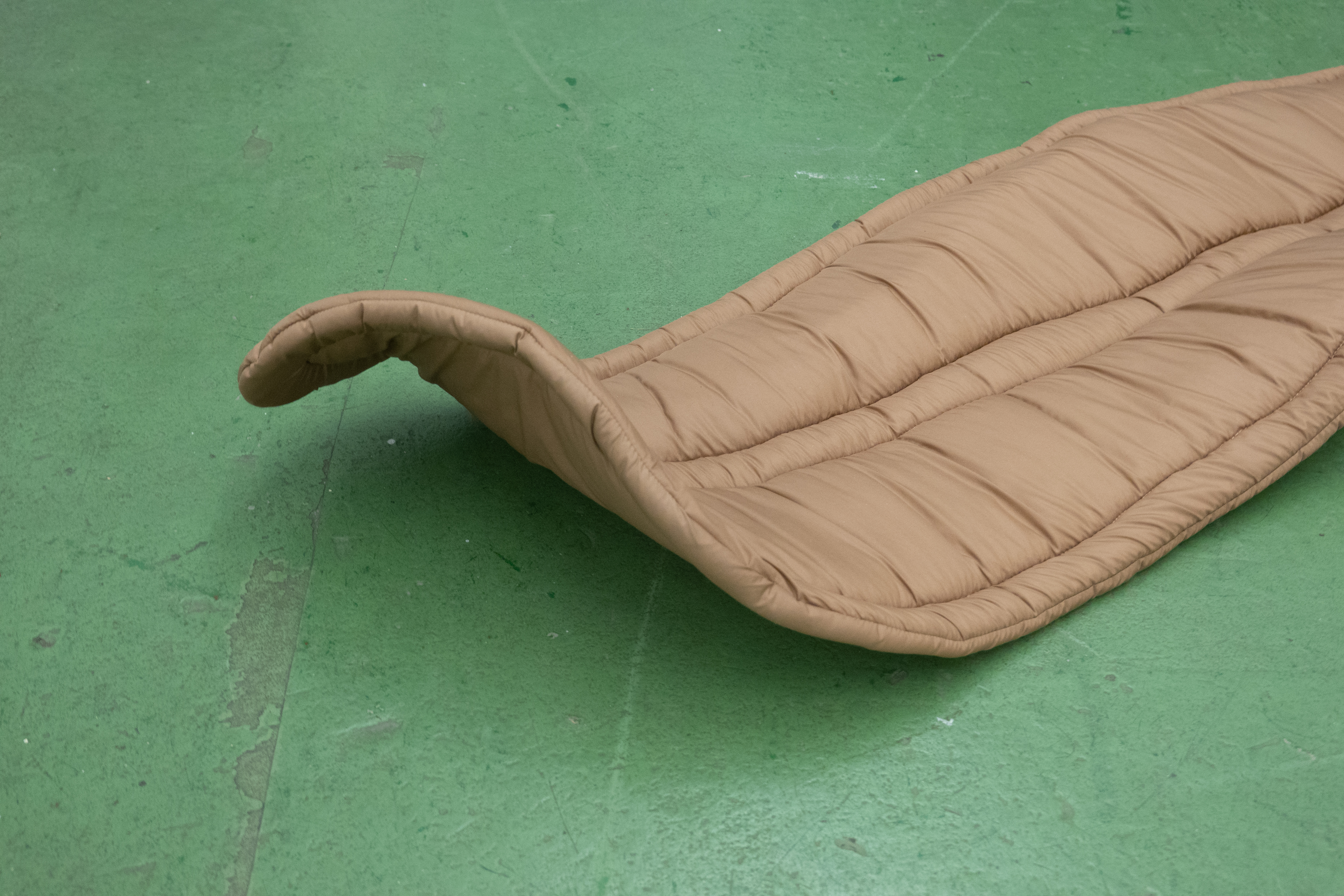 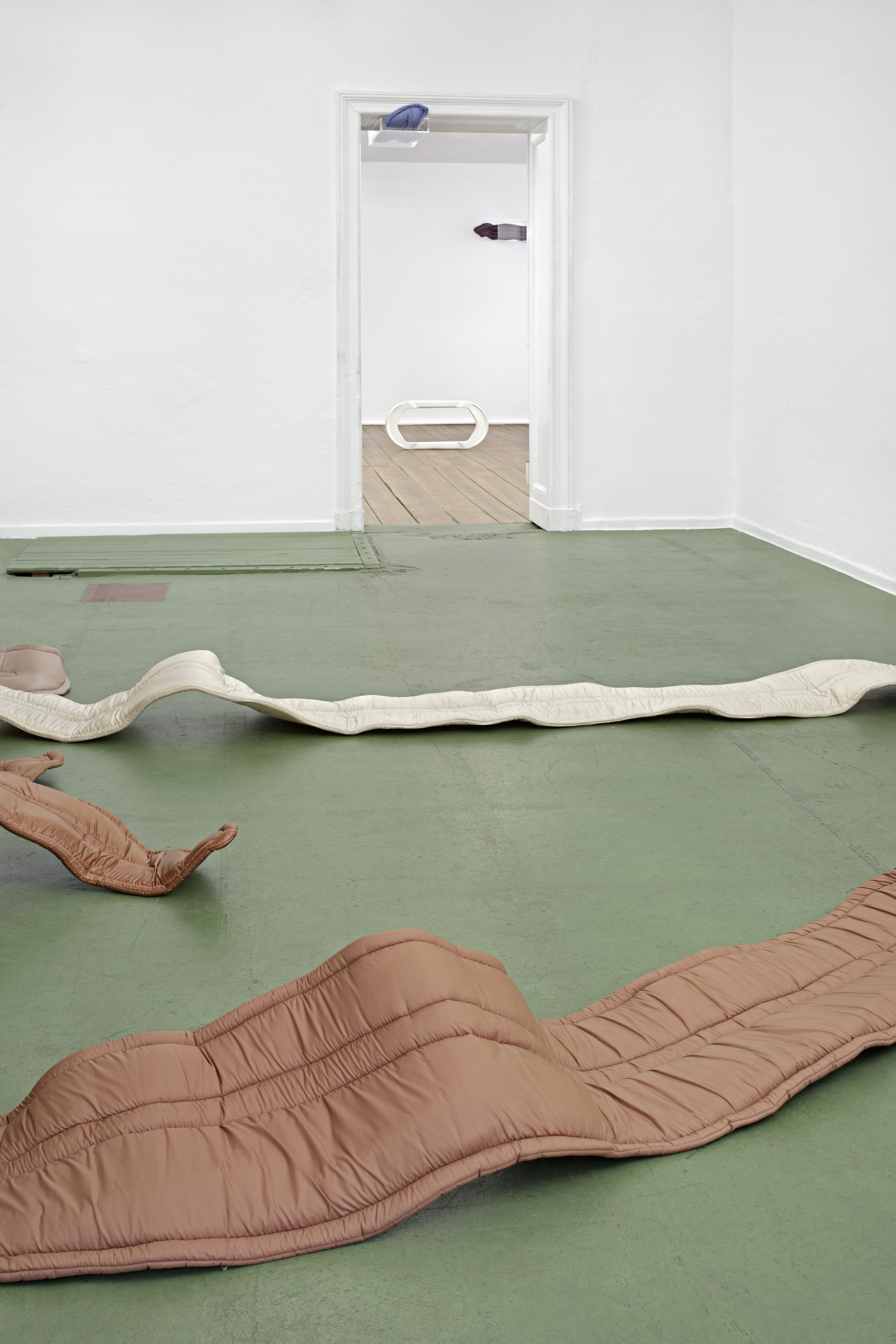 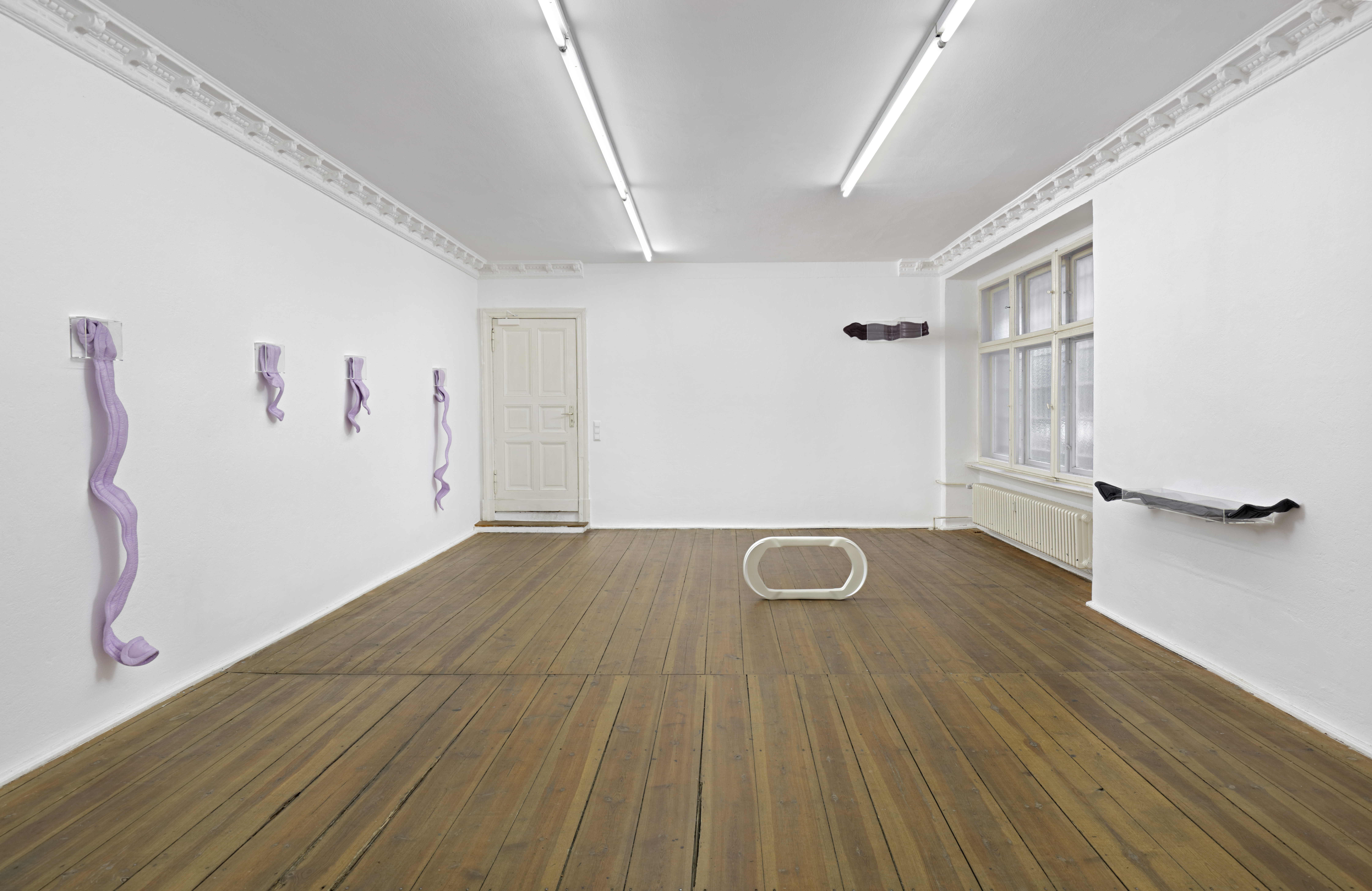 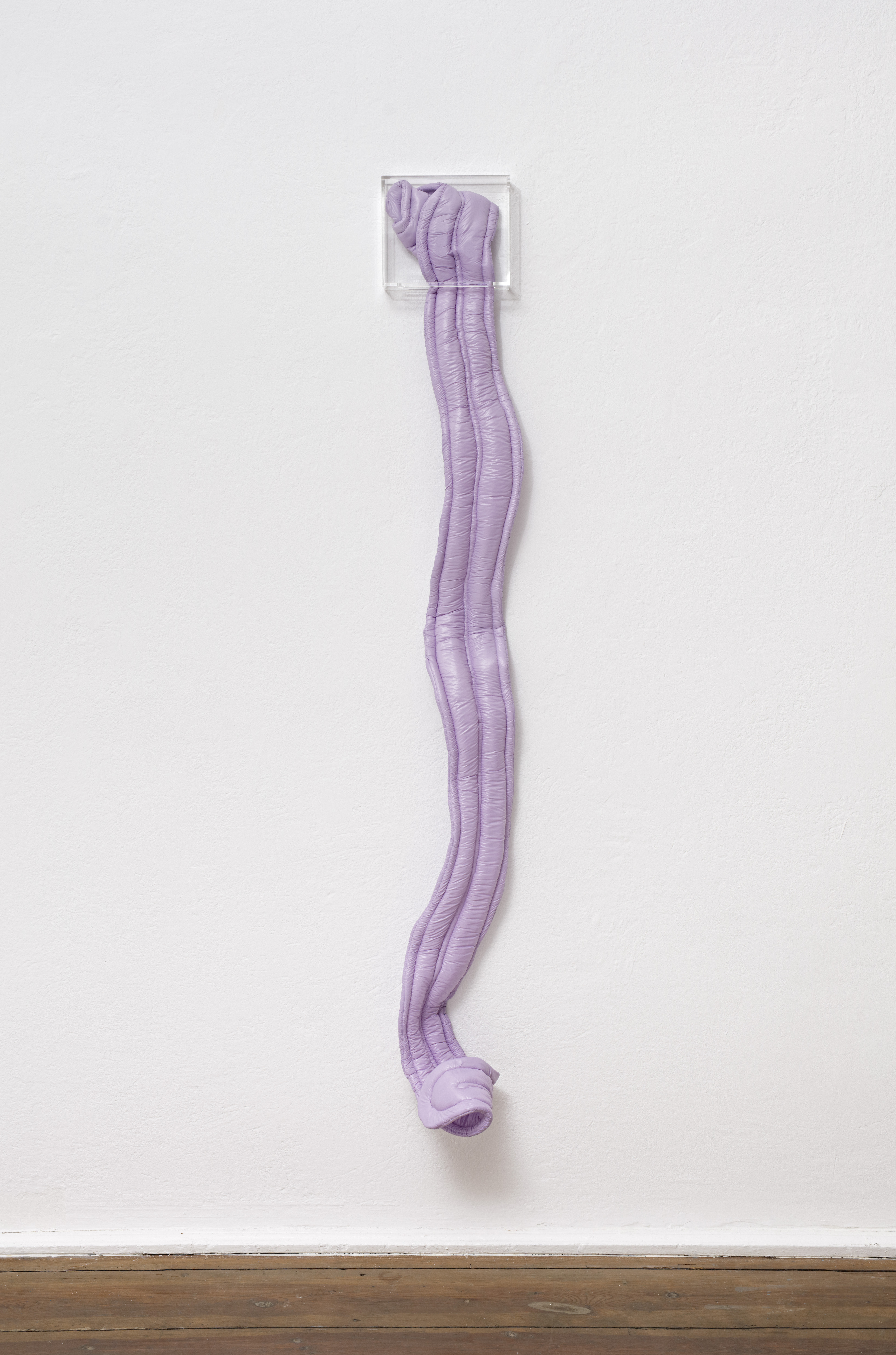 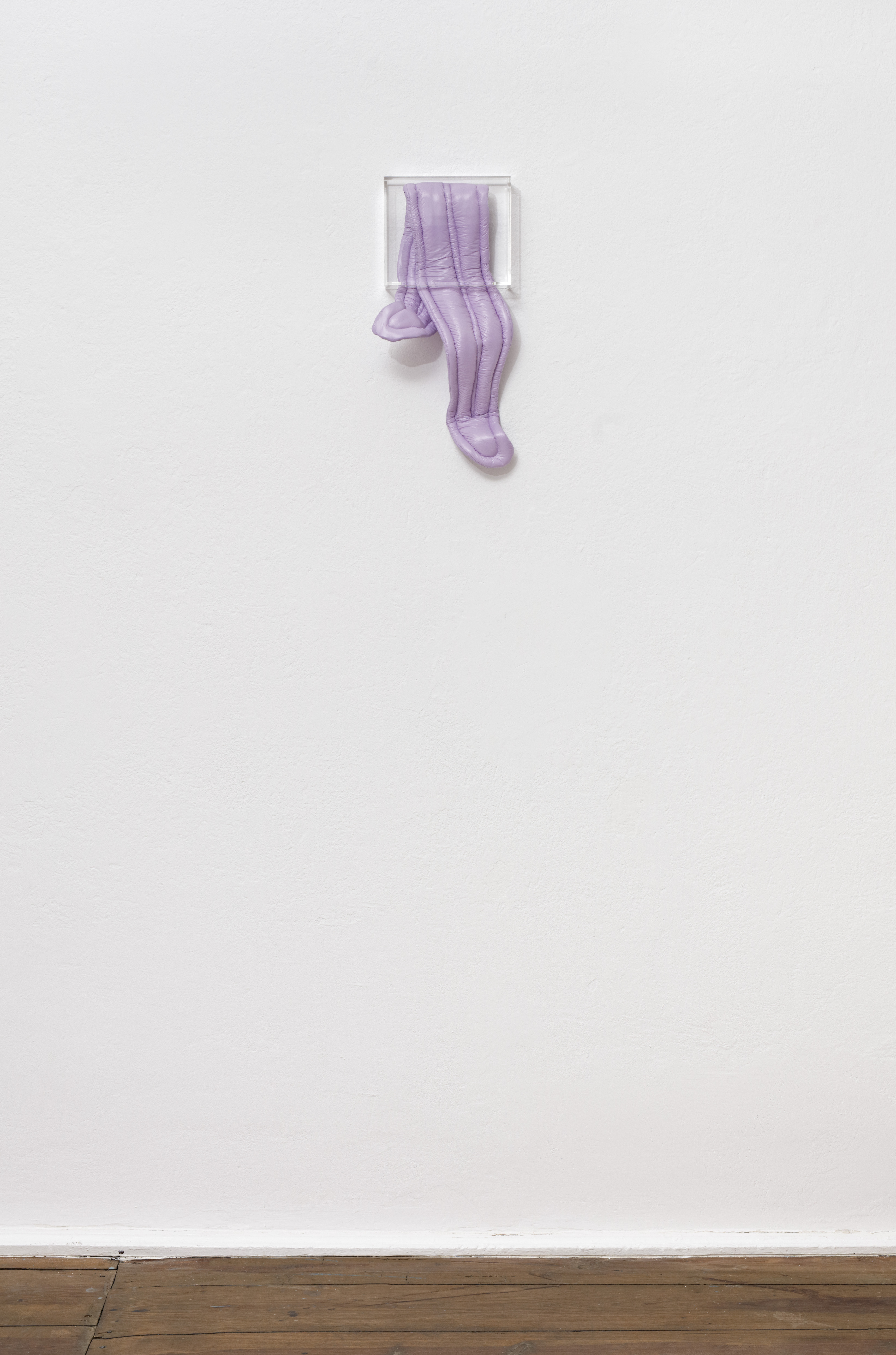 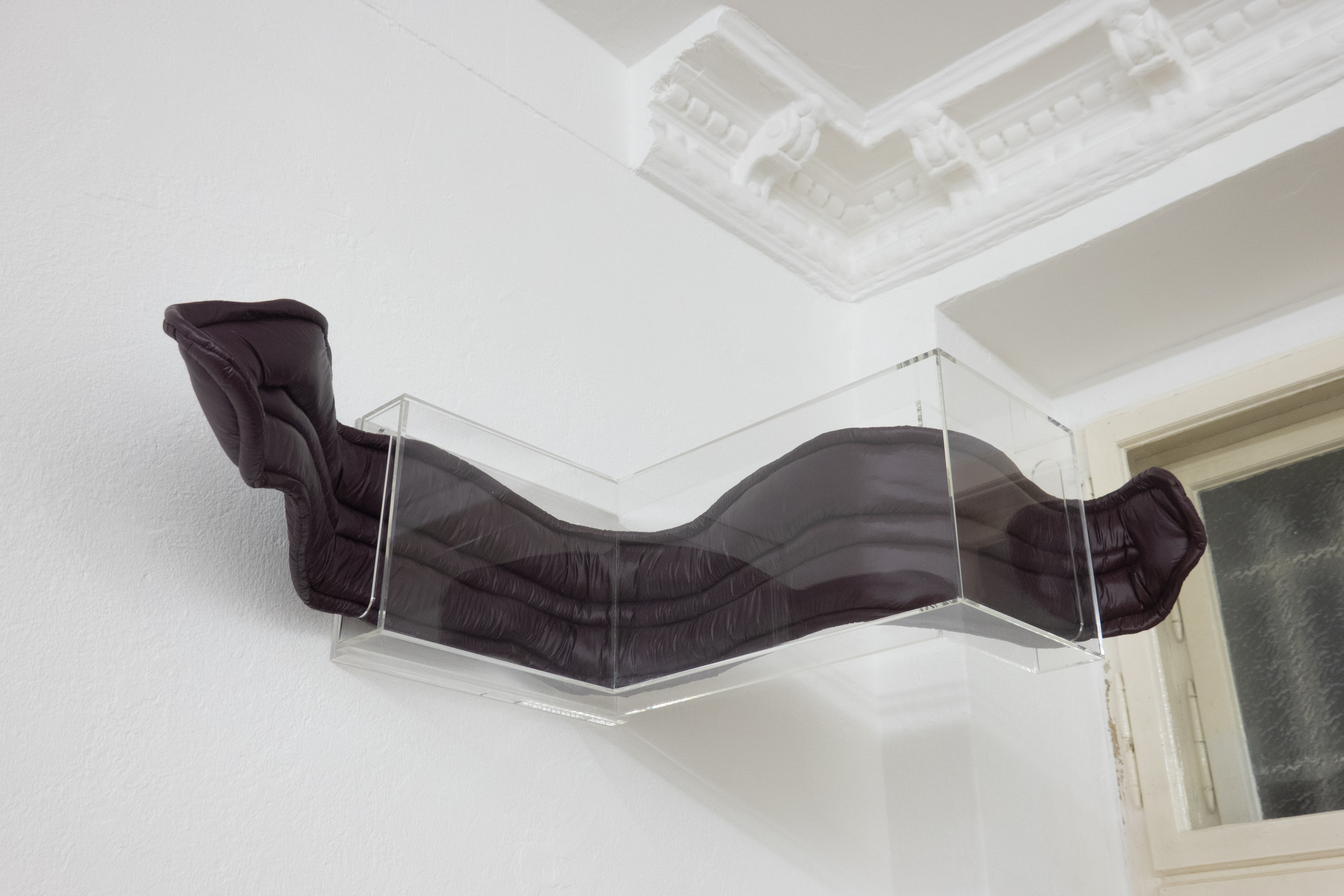 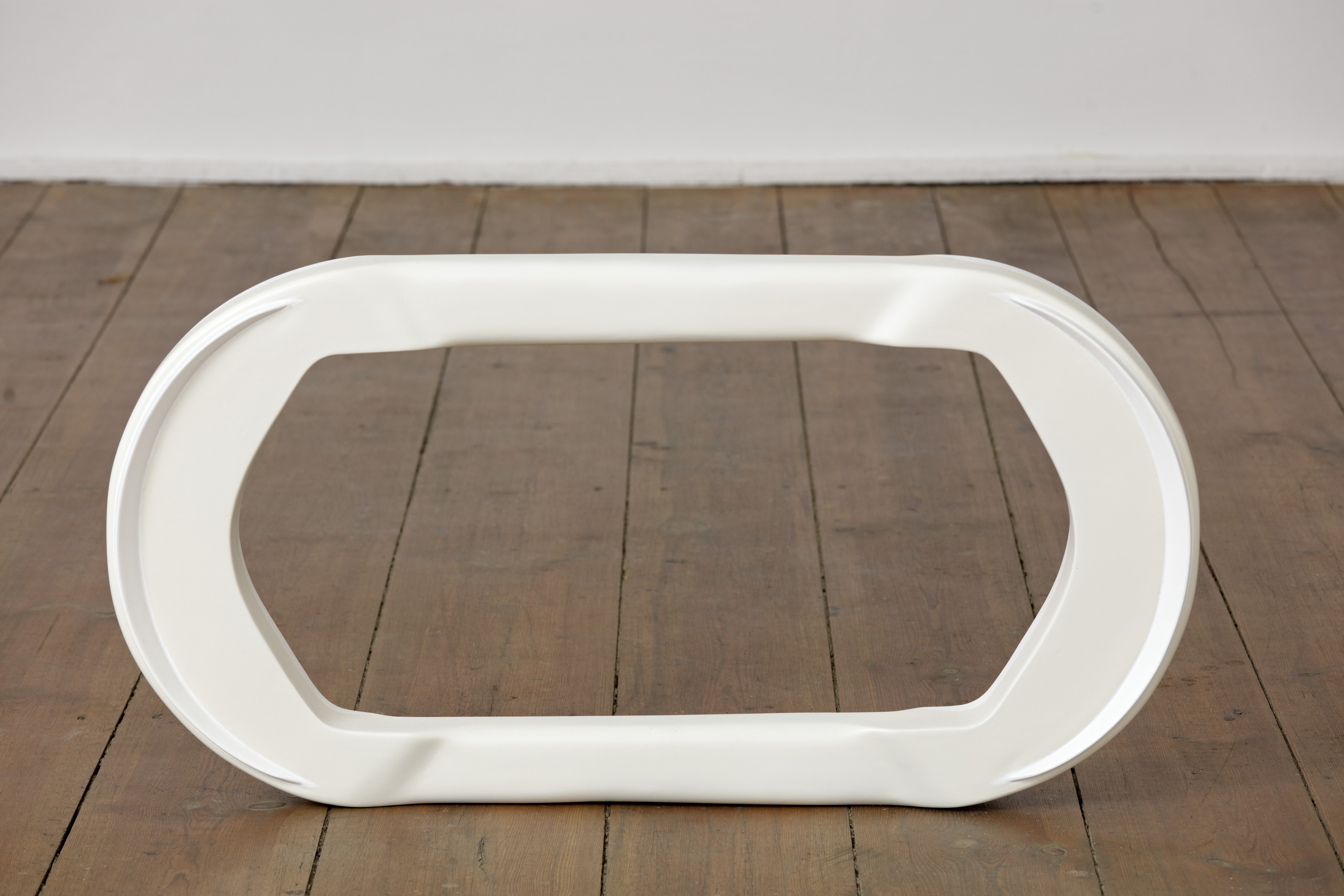 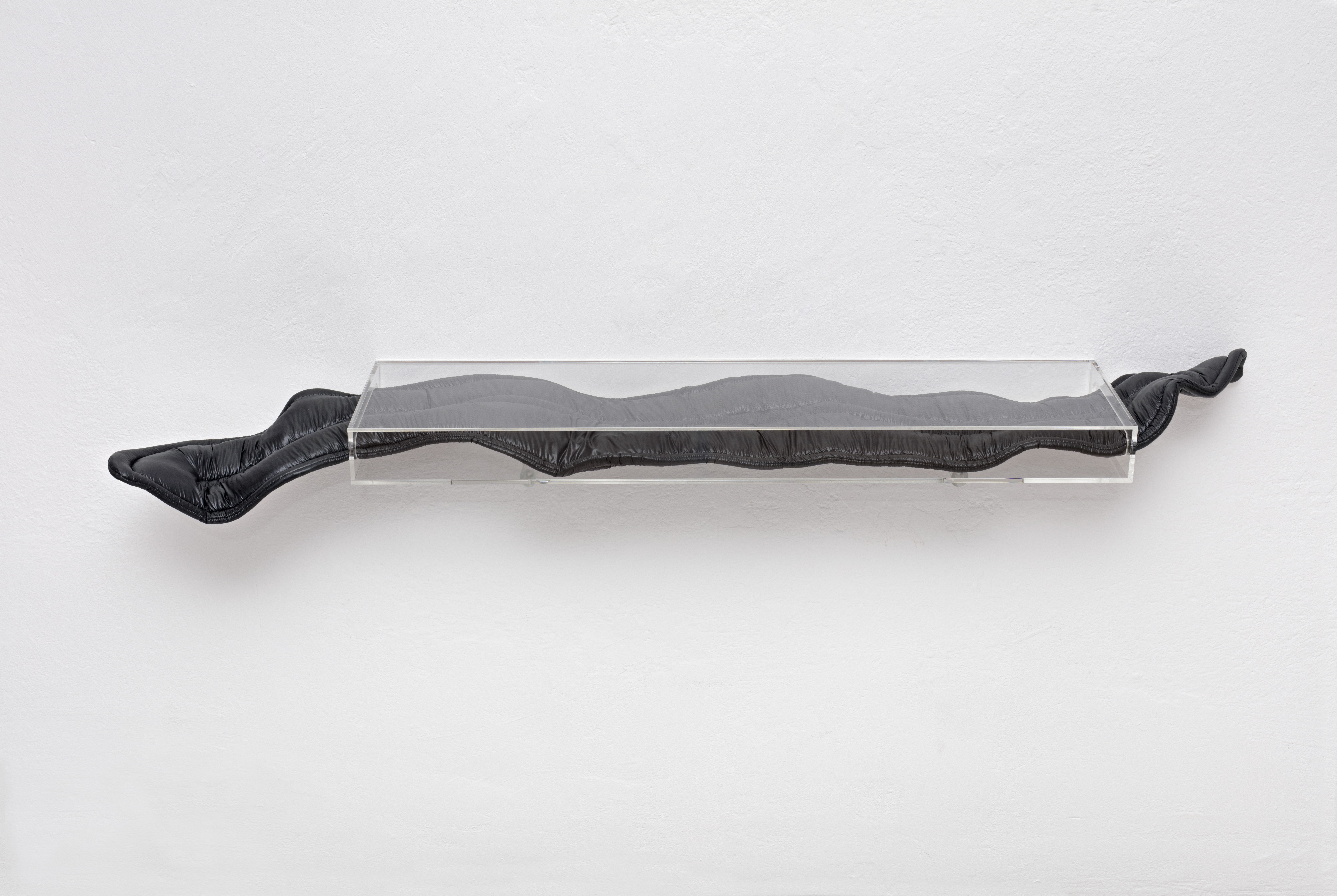 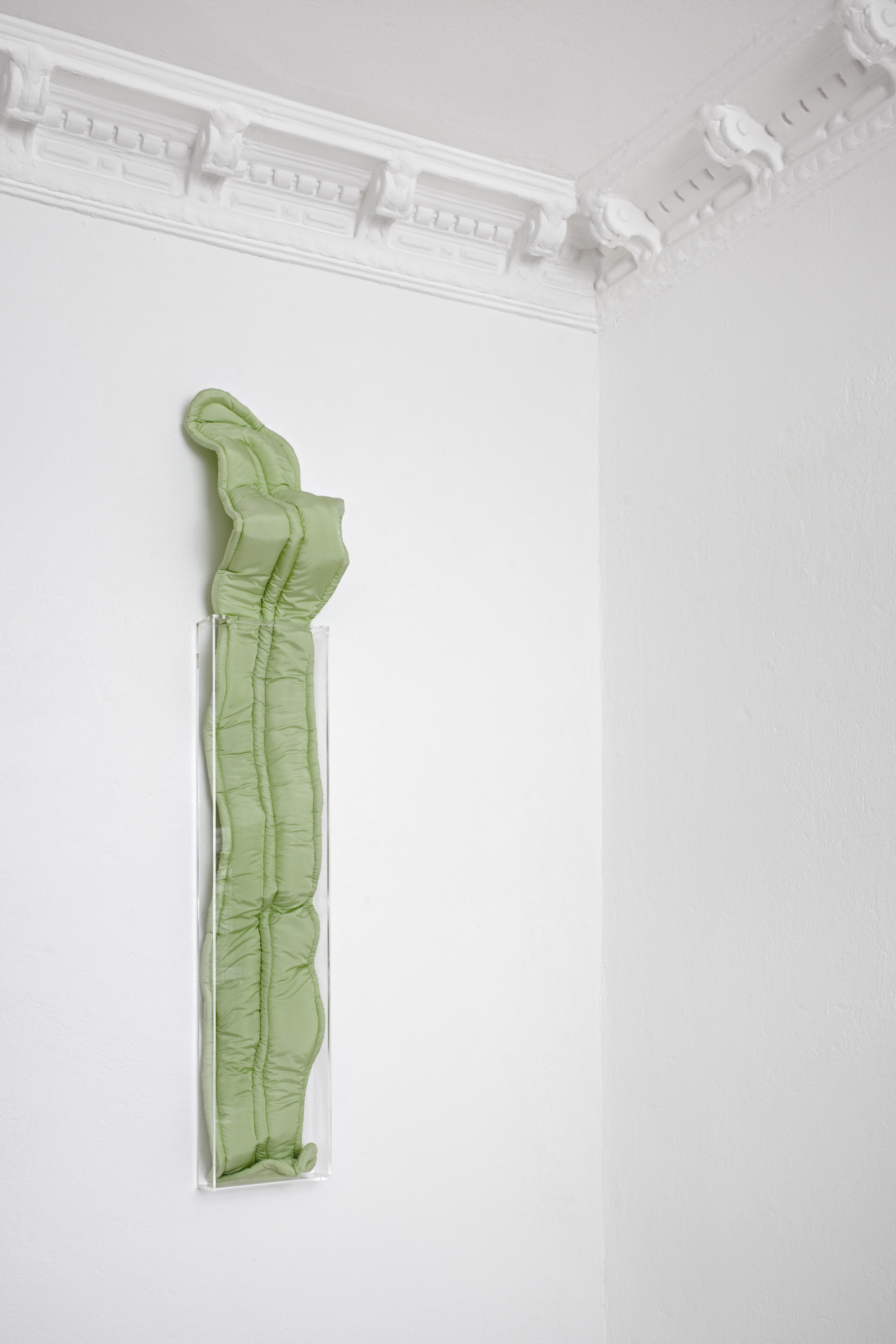 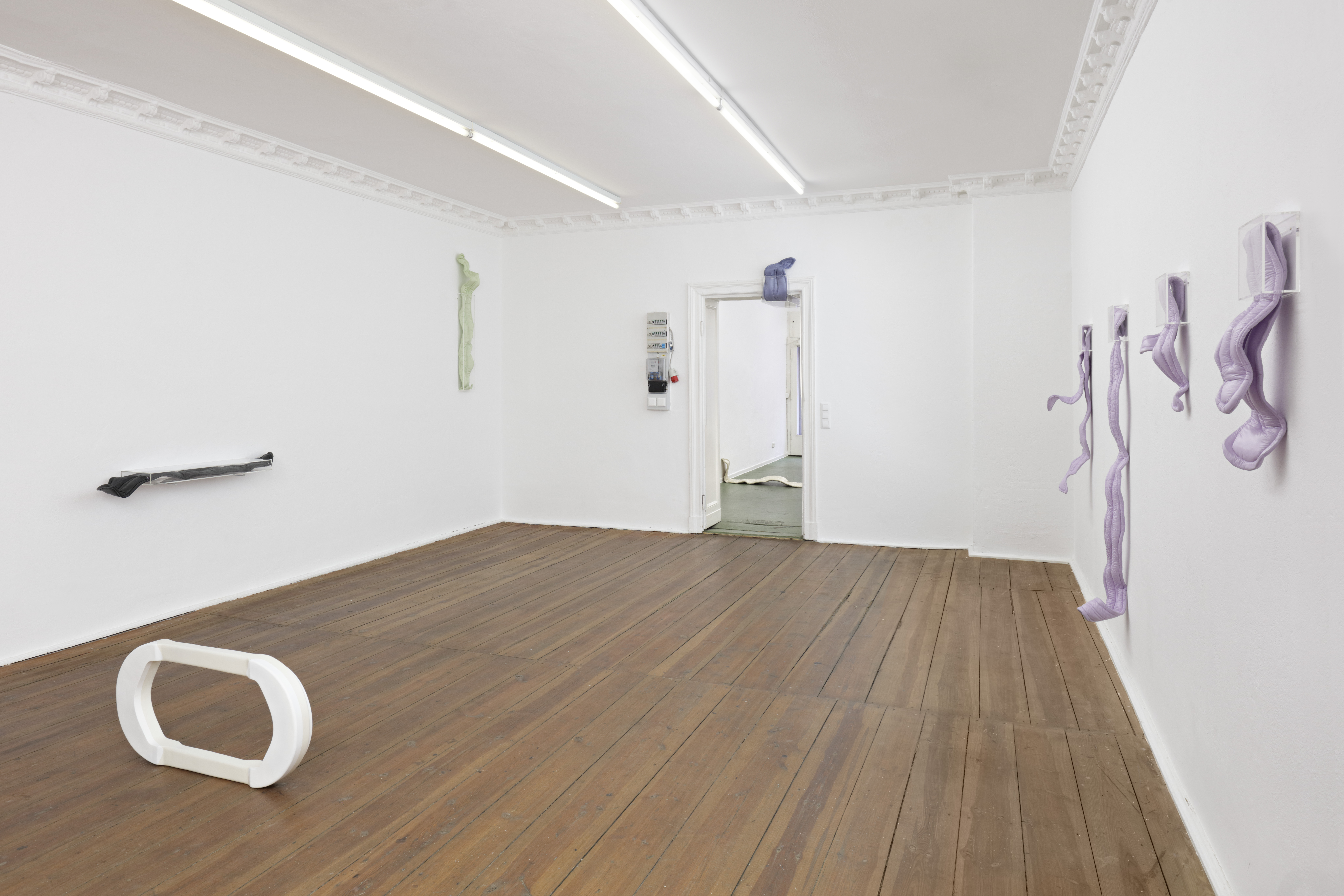 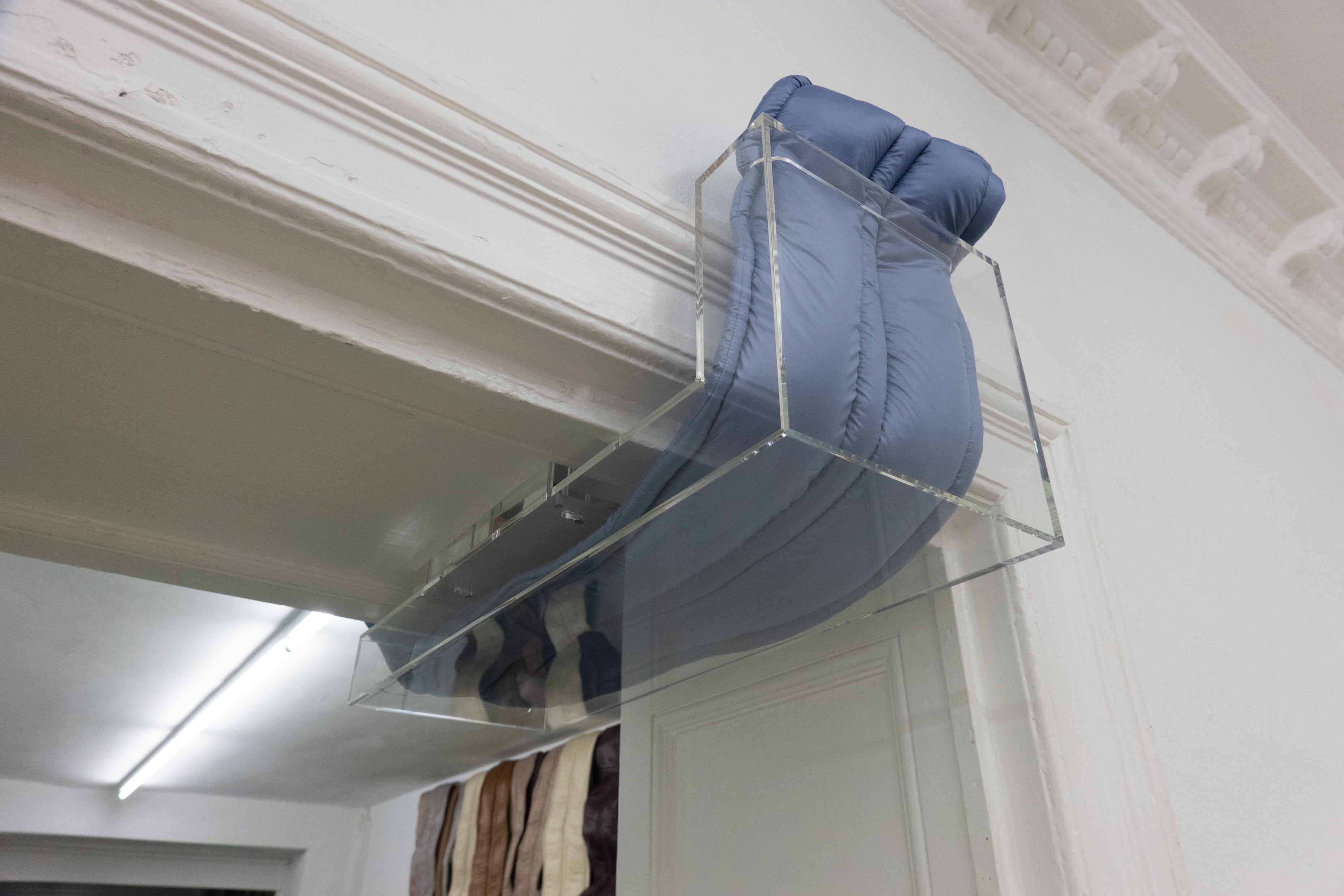 Press on the exhibition: